From 2018 to 2019, the overall salary for female physicians increased for specialists and those in primary care. While this sounds like exciting progress for women in medicine, there is still an increasing pay gap between female physician salaries to that of their male colleagues.

The Pay Gap Continues to Grow 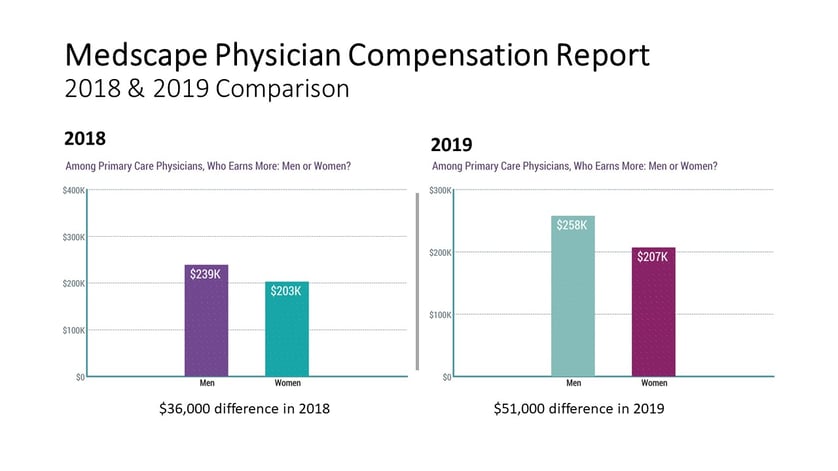 As you can see in the comparison of the 2018 & 2019 Medscape Physician Compensation Report above, the gender pay gap became $15,000 larger for female primary care physicians. (click the image to view the 2019 report)

Why is the gender pay gap increasing in clinical and academic medicine? A JAMA Internal Medicine report debunked the common myth of women physicians receiving a lower salary due to lack of experience. The AMA summarized the findings by saying, "...the salary differences were more pronounced at the highest faculty levels with the adjusted salaries of female full professors (averaging $250,971) registering as comparable to those of male associate professors (averaging $247,212)."

How does the gender pay gap affect women in medicine? One major issue is physician burnout.

Finances are the second leading cause of physician depression and burnout for both male and female physicians. The increasing gender pay gap can put even more pressure on female physicians who are already stressed about their financial situation. They are being paid less than their male colleagues and they likely have to pay off the same hefty medical school debt.

When asked why finances are causing physician depression, the Physician on FIRE explained, "...we’re so far behind our peers who may be ten years into their careers by the time we start ours. While we’re trying to climb out of debt, we see high school and college friends becoming VPs in business and partners in law firms..."

As a whole, the physician community reaches their earning potential much later than their peers. Being late to the game and starting off with a lower salary than men can have lasting affects on female physicians. Fortunately, Dr. Parsons and Dr. Drummond are using their voices to bring awareness to the this issue. Let's look at ways to confront gender disparities as woman in medicine who is struggling or a leader who can lift others up.

3 Ways to Look Past Gender Disparities in Medicine

The pay gap may not be shrinking at the rate it should be, but financial organization is key for physicians at any stage of their career. Every financial decision has an impact on your future. For female physicians, the many life changes from motherhood, training, and practice make it easy to accumulate several bank accounts, insurance policies, investments, annuities and more. After a while, if you’re like most physicians, things may get away from you. It’s important to remember that your biggest asset is YOU!

(2) Recognize the Behavior and Make a Change

Dr. Drummond suggests, "Whether you are a man or a woman make sure you evaluate the requests you make to women in your practice by asking, "Would I make this same request if I were asking a man?"

If you are a female physician recognizing the two main symptoms of the gender unconscious bias, it can be uncomfortable to address with your colleagues, but staying quiet and ignoring the issue will not result in any change. Dr. Drummond also says you could be "walking a tight rope" when wanting the behavior to change. He explains, "It is not easy. If you become good at it, the requests may slow and you may get some relief. However a better approach is to address the issue with the entire team at once if you can."

Equity is Extremely important when considering improving diversity and inclusion practices, but nothing changes without providing equality along with it. To make it simple, equity is like a coach picking a diverse group of people for her basketball team and equality is allowing everyone to play and develop their skills. You can have a diverse team of players and check the boxes on your recruiting goals, but is your team truly giving women and other minorities the same amount of "playing time?" 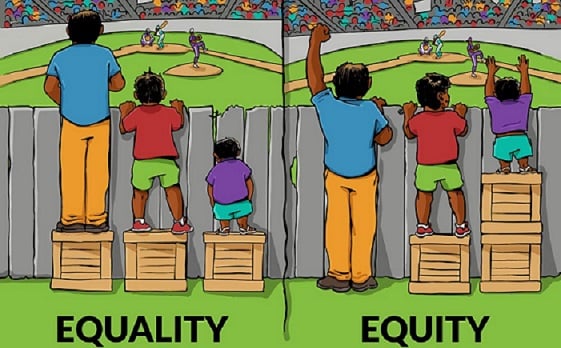 Click the photo above for a more in depth explanation of Equity vs Equality to understand this powerful image.

These three actions can confront the issues of gender disparities in medicine, whether you are a physician, healthcare leader, or colleague.  On a more positive note, a comparison of the 2018 and 2019 Medscape Physician Compensation reports showed a $3,000 decrease in the gender pay gap for female physician specialists from 2018 to 2019.

As we see some small progress in medicine, the increasing gender pay gap for primary care and physician specialists won’t shrink to zero overnight. Confront the causes of higher burnout rates for female physicians head on by speaking up, looking for opportunities to make behavioral changes, and providing equality with equity.

Furthermore, it’s a common misconception that budgeting and financial planning becomes easier when you have more money. Take action sooner rather than later. To ensure your finances are not causing you extra stress, make a financial plan comprised of the 6 money decisions.

Continue learning- tap into our knowledge with monthly updates.

Molly was the marketing director at SDT from October 2017 through November 2020. She is passionate about connecting with people, digital marketing, and serving her community.