Does your physician employment contract include a non-compete clause? Also called “restrictive covenants,"  these clauses are commonly used in physician contracts and are meant to protect the employer’s interests in the event of a physician employee’s departure. 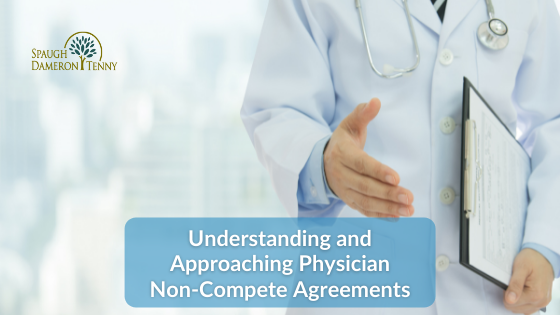 In her last article, A Primer on Physician Compensation: Am I Being Paid Fairly?, our colleague and friend, Anu Murthy, JD, shared that compensation issues are the most frequent questions she received.

The second most frequent questions are related to non-compete provisions. The query typically comes from a client dissatisfied with a current work situation and wanting to make a professional, but not necessarily, personal or geographic move. The physician usually has a non-compete restriction in their employment or other underlying agreement stating that:

Non-compete clauses in physician employment and shareholder agreements are almost universal. However, whether or not they are legally enforceable as drafted varies from state to state. The legal standard for enforcement is whether the restrictions are “reasonable” as to the geographic and timeframes stated. Some states have very broad interpretations of reasonableness. However, there is a growing trend to narrow or even disallow these types of agreements entirely in recent years. More on that trend later.

In the physician arena, there are several different kinds of restrictive covenants. First, there are non-competition covenants that restrict where somebody can work and for how long after the employment relationship ends. Second, non-solicitation covenants apply to physicians who may want to take existing patients away from their former employer or practice. Finally, there is a non-solicitation aspect of restrictive covenants intended to prevent the departing physician from hiring practice employees to start their own competitive business.

Is a non-compete in a contract enforceable?

Anu’s typical client calls her to tell her they are resigning from a job and ask whether the non-compete in their contract is really enforceable. They usually want to stay in the area and either hang up their own shingle or work for a competitor, thereby potentially violating the restrictive covenants in their current agreement.

Her short answer? Yes, the restrictive covenants are likely enforceable, and they should proceed under that assumption and plan their next employment situation accordingly or risk litigation. But unfortunately, this is not the answer her clients want to hear. Not surprisingly, physicians don’t want to move their families and start over somewhere else. They have loyal patients, strong referral networks, and ties to their community. It does not seem fair that an employer could force them to leave all that and start over.

How should a doctor navigate a non-compete (restrictive covenant)?

Several detrimental effects are apparent in the worst-case scenario of a doctor having to leave a geographic area to comply with restrictive covenants. They include: patient access to the physician is impeded, a physicians’ ability to choose their employer is limited, and overall competition is stifled. Despite projected shortages of 37,800 to 124,000 physicians by 2034, health care employers still commonly restrict physician mobility and patient choice via non-compete agreements. Many physicians are either forced to move or file suit in the hopes of getting a restrictive covenant invalidated.

Good news from the Executive Branch?

Recent federal policy provides hope to doctors who are grappling with restrictive covenants.

In July 2021, President Biden issued Executive Order 14036: Promoting Competition in the American Economy, which outlines federal action to combat anti-competitive behavior in health care, technology, and agriculture. The order asserts that “powerful companies require workers to sign non-compete agreements that restrict their ability to change jobs” and directs the Federal Trade Commission (FTC) to use rulemaking “to curtail the unfair use of non-compete clauses or agreements and other clauses or agreements that may unfairly limit worker mobility.”

The executive order could signal a shift toward more regulation at the federal level. Currently, what may be unenforceable in one state may not be in another. For example, all non-compete clauses are generally unenforceable in California, Montana, North Dakota, and Oklahoma. Some states, such as Massachusetts and Connecticut, are moving towards limiting restrictive covenants to promote competition and access to care.

There is, however, a rationale for requiring and enforcing non-compete clauses inside healthcare systems. Employers spend significant resources in hiring physicians and developing their practices. This investment creates a legitimate business interest in protecting those investments from dilution by departing employees.

Executive Order 14036 is just the opening volley in this highly complex area of the healthcare ecosystem. It sets the stage for a national conversation that will hopefully balance employer interests with a physician’s ability to choose where to work and the overarching and nationwide need to expand access to quality care for all patients. Stay tuned!

We are grateful to Anu Murthy for sharing her knowledge and expertise and partnering with Spaugh Dameron Tenny on blogs about healthcare contracts and negotiations, physician compensation, non-compete contracts, and RVUs.

Are you thinking about leaving your current role and have concerns about how the non-compete clause in your physician employment contract will affect you?

We encourage you to reach out to your trusted advisors – your healthcare attorney, accountant, and financial planner – and do your own research before putting in your resignation. They can provide guidance specific to your situation to help you financially prepare before starting a new role. Please reach out if Spaugh Dameron Tenny can be of assistance as you plan your financial future.

Anu Murthy is a healthcare attorney and consultant who focuses primarily on physician, dentist and advance care practitioner employment contracts, partnership agreements, and other practice-related matters. Anu also advises companies in the areas of business formation, corporate matters, and brand protection. You can contact her at anumurthyesq@gmail.com and 704-860-1305.

Acronyms make up the language of the healthcare ecosystem. CMS, HIPAA, CPT, and RVU…to name just a few!

END_OF_DOCUMENT_TOKEN_TO_BE_REPLACED

Buying Into a Surgery Center

Making the decision early on in your physician career to buy into a surgery center can be a daunting one. (It can be really daunting at any stage in ...