Tax Implications of Moving to Another State

Filing taxes can be confusing even when nothing has really changed year to year. Add a move to another state in the mix, and they can be downright overwhelming. Make it a priority to consult with your accountant and financial planner to better understand how your taxes and finances will be affected before relocating to a new state. 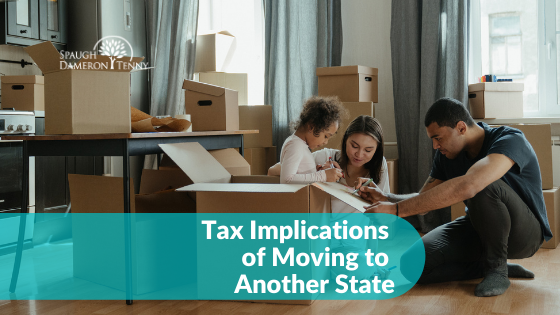 When we regularly receive similar questions from our clients, we try to share information around that common inquiry. One of those questions has to do with something many physicians and dentists frequently experience when relocating states after training, residency, or fellowship; the tax implications when you move states.

Typically, this occurs when one of several things happen:

We reached out to our friend and colleague, Charles Whaley, CPA CHBC for some guidance on this point. Charles is a Certified Healthcare Business Consultant and serves as the Director of Tax Services for The HMC Family of Companies.

First, we asked Charles to help define the issue:

He shared that there are a couple of things to consider:

Next, we asked Charles a series of questions to help shed some light for physicians and dentists considering a move to another state. His answers are below each question and are in italics.

Q1) When do you generally discover this issue?

Unfortunately, more often than not, these types of situations are brought to my attention [as a CPA] after the fact, when there isn’t much one can do from a tax-planning standpoint.

For example, a newly relocated dentist for whom my firm is engaged to prepare his taxes may let us know (after the tax year has ended) that he moved from Florida to North Carolina after completing his training. He may then go on to tell us that once established in North Carolina, he sold a significant batch of equity investments to recoup the down payment for his new home in NC. If this dentist had obtained proper guidance before moving to NC, he would have been advised to sell the stock while still a Florida resident. Since Florida has no personal income tax, there would be no state tax impact on the sale of equities. However, because he waited until he set up residency in NC to sell the stock, he will have to pay NC taxes on the capital gains realized (at a rate of 5.25%). And that’s in addition to the 15%-20% capital gains taxes charged on his federal personal tax return.

Q2) Do you pay taxes where you live or where you work?

Generally speaking, earned income is taxed by the home state when an individual lives in one state but works in another state. In many cases, you may also be required to file a state tax return in the state where the work was performed. Some states have enacted reciprocal tax agreements which eliminate the need to file a separate tax return in the state in which work was completed.

Don’t live in one of these states? No need to worry - there are federal laws in place to prevent two states from taxing the same income. The home state’s tax return will give you a credit for income taxes paid to other state jurisdictions to avoid double-taxation.

Q3) How long do you have to live in a state to file taxes?

Each state has its own rules for determining residency. However, if you permanently moved to another state, you will be required to file two separate state tax returns: one for each state in which you lived during the tax year. This, of course, assumes that both states charge income taxes.

Q4) How do I file taxes if I lived in two states in one year?

Assuming both states charge income taxes, you will file a tax return in each state (as indicated above) and claim “part-year residence” on each return. This will allow you to divide your income between each state instead of paying taxes twice.

Q5) What happens if I moved from a state that doesn’t tax personal income?

In this case, you would only file a state tax return for the state to which you moved, claiming part-year residence. Thus, you will only be charged state income tax on the income earned/received while a resident of the new state.

Q6) What does it mean if I move to a state that doesn’t tax personal income?

The answer to this is similar to the preceding question but in reverse. You would file a state return for the state from which you moved, claiming part-year residence. In this case, you would only be charged state income tax on the income earned/received while a resident of the old state.

Q7) Can/Should I file jointly if my spouse worked in a different state?

For the most part, a joint return will be the best approach. Without reciprocity agreements in place, you would need to file state tax returns in both states, but the credit for taxes paid in another state will prevent any double taxation on income.

This scenario can quickly escalate into a more complex tax issue. For example, what if the “out of state working” spouse needed to rent a home in the other state to make commuting a non-issue? In this case, this arrangement may constitute the out-of-state spouse having set up their permanent residence in the other state. The correct tax strategy will likely depend on the states involved. For example, some states allow taxpayers to file their federal tax returns as “married filing jointly” while filing their respective state returns as “married filing separately.” But such strategies would need to be analyzed on a taxpayer-by-taxpayer basis to determine the best course of action.

Q8) Can I deduct my moving expenses?

The answer to this question changed dramatically with the passage of The Tax Cuts and Jobs Act of 2017 (“TCJA”). Before this new law, your moving expenses would likely have been deductible if you moved for a new job or sought new work. Because of the TCJA, starting in 2018, Congress did away with the federal tax deduction for moving expenses for almost all taxpayers. Active military personnel can still claim the federal deduction but must meet specific requirements to do so.

As of July 2019, seven states still allowed a moving expense deduction in some form or fashion. Those states are: Arkansas, California, Hawaii, Massachusetts, New Jersey, New York, and Pennsylvania.

Q9) Are there things I should do to prepare for this?

Before you pack up your belongings and move to another state, or accept an out-of-state job, consult a tax professional to help determine the steps to take to ensure paying the least amount in taxes as a result of your move or new employment.

Q10) What are the benefits of getting professional advice?

A good tax advisor can help shed some light on the many pitfalls of moving to a new state or accepting a new out-of-state job. In addition, they can help you structure your move in such a way that results in the lowest tax burden to you.

We are grateful to Charles Whaley for sharing his time and expertise with us to help address this frequent concern.

Are you planning an out-of-state move soon?

We encourage you to reach out to your trusted financial advisors – your accountant and your financial planner – before the move happens. They can provide guidance specific to your situation to help you financially prepare before you relocate. Please reach out if Spaugh Dameron Tenny can be of assistance in your upcoming move or if you have a financial planning question.

Charles is a Certified Healthcare Business Consultant and serves as the Director of Tax Services for The HMC Family of Companies, which includes Healthcare Management Consultants, The Dental CFO, The HMC Tax Group, and Xccelerated Team Performance. His firm offers a comprehensive menu of services that touch every facet of practice operations from strategic practice consulting to executive-level leadership coaching and tax planning and tax preparation. In addition, he is a Certified Public Accountant with over 15 years of “Big 4” public accounting and industry experience in providing quality accounting and tax services to a diverse range of clients.