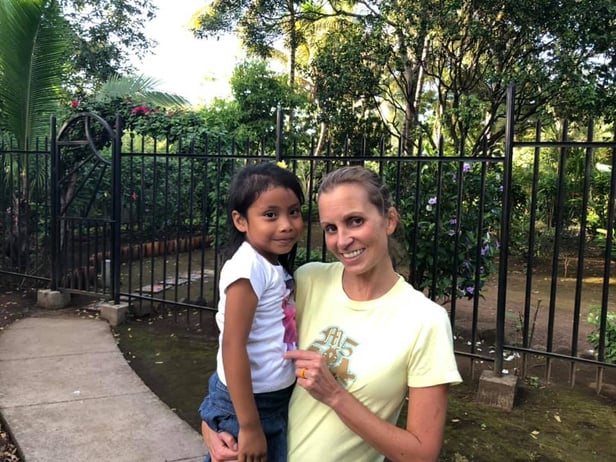 Dr. Kathy Raynor, board certified physician in internal medicine, specializing in gastroenterology, returned from serving in Nicaragua through Spaugh Dameron Tenny's GO to GROW Scholarship program. On November 9-15, Dr. Kathy Raynor traveled to Los Reyos de Esperanza in Nicaragua where she helped with clinicals, taught at the Community Health Fair, and performed home visits to assist ailing villagers. She was struck by the level of gratitude she received from her patients and made an impact on the community in her stay.

The following was derived from Dr. Raynor’s journal and details her experience. 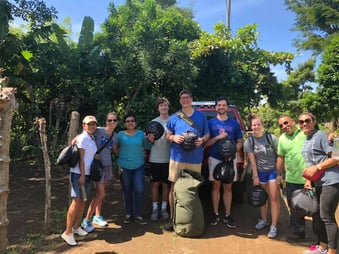 Dr. Kathy Raynor started the day early on November 9, 2019 boarding an early flight out of Charleston, she was Nicaragua bound.

The day was filled with pleasant conversations with the flight crew and an overwhelming sense of gratitude that grew with every kind moment she experienced.

Upon boarding the plane, she was welcomed with hugs from the crew, and an offer for a first class seat, which she declined but appreciated.

She arrived in Nicaragua on Saturday, November 9, 2019, brimming with gratitude from the positive vibes.

She met with Jeyling, coach and administrator of Bless Back Worldwide Business academy,  in the Managua airport along with the rest of the “brigade” and then took a school bus ride to Los Rayos de Esperanza (LRdE) in Nicaragua.

In her journal, she describes the compound as “beautiful with gorgeous landscaping.”

Later in the day, she met with the rest of the staff and took a brief tour of the grounds. The first night finished with a brief meeting in which she and the team discussed the schedule for the trip followed by dinner with the group.

The team was complete when Shawn and Annette arrived that afternoon. They spent the rest of the day doing EMR training and prepping for the clinics they would be running over the following days.

Shawn was a second-year resident, and although he was in the midst of a hectic ICU schedule, he jumped at making arrangements to join the trip when Dr. Raynor presented him the opportunity. 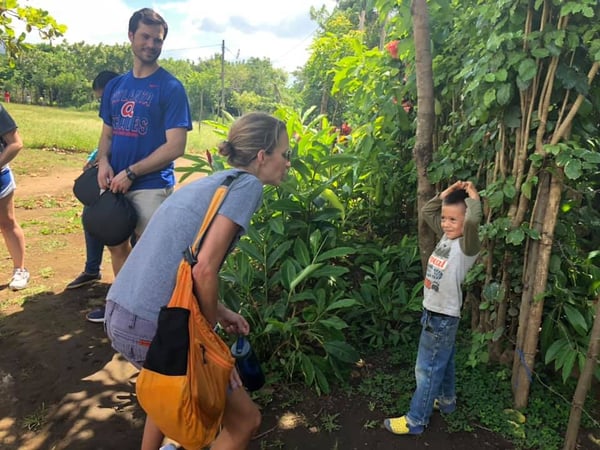 After breakfast, she and the group participated in an introductory Spanish class to help them brush up and acquaint themselves with some elementary conversations. They then loaded up donated mosquito nets and walked through a village (barrio) with a translator discussing and educating the residents on dengue prevention and handing out the nets. 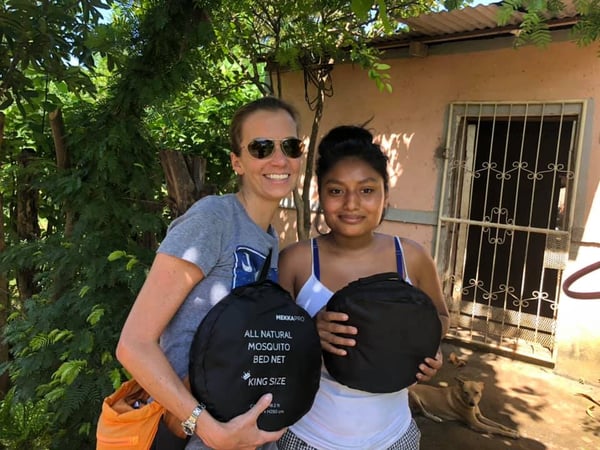 Dr. Raynor described being amazed by the variety of medications that they had in stock, describing their accessibility, “anyone could walk in and purchase-antibiotics, BP meds, insulin, etc.”

She ended the second day at church where the pastor helped them to gain permission to work in the clinic for the week. She described the church service as “vibrant, with many families in attendance and many small, well-behaved children.”

Monday and Tuesday were non-stop, action packed days filled with work in the clinic in the morning and afternoon. Different villages were invited depending on the time of day. Some of the visitors were families with small children and various medical needs, some of the visitors just needed “vitamins”, but many of the people who came in on those days had blood pressure  and sugar levels that normally would have required hospitalization, but they did what they could with the resources that they had. 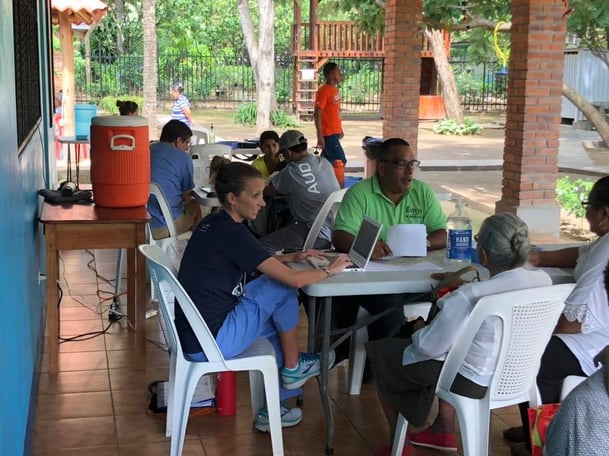 She describes the experience, “There were so many appreciative and thankful people. It was mentally exhausting but so gratifying at the same time.”

Dr. Raynor worked to focus her intentions while she saw patients, she aimed to see the person not just a number or a series of symptoms.

“Throughout the clinic I was mindful to incorporate the opinion of Dr. G who is the Nicaraguan clinic doctor who works full-time when volunteers are not visiting.” She was very respectful of the way things were run and describes being “very impressed with the clinical guidelines and protocols that were already in place for the clinic.” She said the guidelines made the clinical decisions much easier.

She made a point to mention the importance of respecting and following the lead of local physicians, “All of this is so important during mission trips like this. One never wants to undermine the local health providers or systems in place.”

Tuesday evening the team visited an area called the Mirador de Caterina, which is a scenic viewpoint overlooking the Apoyo Lagoon. It had been formed by a volcanic eruption. Later in the afternoon, using the ancient indigenous methods that had been passed down from generation to generation. 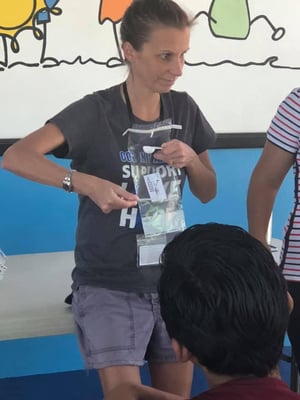 The team was busy Wednesday with clinic, as expected. Later in the day they held what was called a “Community Health Fair” where over 90 people attended. Dr, Raynor describes being amazed by the turnout and furthermore by the number of interested people wanting to learn about various aspects of healthcare.

The team taught on Diabetes, Hypertension, Diarrhea, Hydration, Medication Safety and Basic Wound Care. The attendees received tangible resources to utilize in their lives to combat the health issues they faced on a regular basis, these included Oral Rehydration Solution Kits and Childproof Medication Storage Bags). It was through Bless Back Worldwide donations that they were able to provide the supplies to the villagers. Every donation is used for the betterment of less fortunate communities.

Dr. Raynor spoke on diarrhea, but tried to make it as interesting as possible by providing them with a “recipe” for an oral rehydration solution that they can easily make at home to prevent dehydration from diarrheal illnesses. She felt it was an important and relevant topic to cover, considering many of the villagers and visitors did not have access to clean drinking water, making parasitic infections common and rampant.

The clear bag is a reusable and sealable bag that holds liquids and has the recipe for Oral Rehydration Solution attached, the white bag is a childproof medication storage bag.

They were each given reusable plastic sealable 1L bags 1Land measuring spoons for both the salt and sugar to be added. They taped the recipe for the Oral Rehydration Solution on the front of all the bags and encouraged “sharing” this recipe with friends and family in hopes of minimizing dehydration and keeping villagers better nourished and hydrated during acute episodes. This was a great way to reinforce community empowerment and facilitate further healthcare development.

Translation: “At sunset, the sick went to Jesus. he put his hands on and healed them. Lucas 4:40”

The day started with a morning clinic in which another 45 patients were seen by the providers.  The afternoon was spent doing “home visits.” Dr. Raynor along with the rest of the crew were all divided into two teams the night before and were able to get a history on the patients they would be seeing. Dr. Raynor’s team went to three homes located about 30 minutes from LRdE.

Dr. Raynor recalls the second visit, “There were three “special needs” children all being cared for by a single mother. All were bedbound with severe contractures and nonverbal. The one boy, Juan had a complication from a kidney surgery that culminated into a chronically draining fistula on his flank that required dressing and packing regularly. I was overwhelmed with emotion seeing this mother trying to manage what appeared to be a full time job for 3 people.”

The mother kept telling the translator that she “was tired.”

Dr. Raynor continues on in her journal, “My heart broke for her and the children.”

The last home was a family of five with three mentally challenged adults, all of which were so happy. Dr. Raynor says, “Their smiles and laughs were infectious. This gave me great joy to the end of the day, I can still see one of the men’s faces-smile so wide all you saw was gums and teeth!” 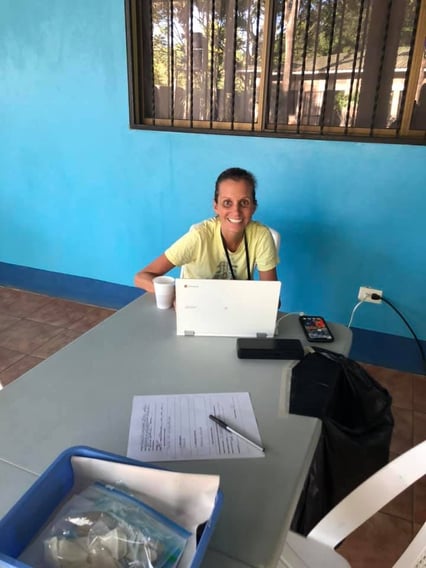 The crew was able to see new patients and “call back” some of those that they had seen earlier in the week that were sick and needed to be checked on again.

Dr. Raynor had treated a 22 year-old woman on home peritoneal dialysis (which is amazing in and of itself given the living conditions!) and walked into the clinic on Monday morning with a BP of 190/170 and heart rate of 125bpm. Dr. Raynor describes how she felt, “I was very worried about her and she had just been discharged from the local hospital but couldn’t afford the medications they had prescribed. Upon her return, her BP was better but she was having more shortness of breath. After giving her a nebulizer and another dose of Amlodipine she walked out of the clinic looking much better.”

Dr. Raynor herself  provided the clinic money to purchase a home BP machine for the young woman in hopes that she could better monitor herself provided she is able to obtain her antihypertensives.

Dr. Raynor spent the last evening of the trip in Grenada touring the beautiful city and just spending time with the team.

She ends her journal entries on the trip with this,

“As I have returned to Myrtle Beach and allowed myself some time to reflect on this past week, I have an overwhelming feeling of gratitude.

The trip was so well organized, and having a leader, such as Kristine Butler and Dr. Mike made it seamless. They both were so supportive and encouraging with such positive energy on a daily basis. The other team members really worked well together, which I know isn’t always the case on some mission trips! So much so, that we talked about all of us going on another one together in the near future!

I was amazed at the compassion and energy the staff at LRdE poured into their job. Each one of them cared so deeply for the patients they saw and treated. They reminded me of the ‘why’ I went into medicine...humbled is an understatement. Thankful doesn’t seem strong enough. ”

Become a Part of the GO to GROW Mission:

Taking part in a GO to GROW mission trip is a great way to follow your passion while helping those who need it most. Haiti and Nicaragua are the two poorest countries in the Western Hemisphere and medical teams are always needed to help their citizens survive. You can help, apply for the Spaugh Dameron Tenny’s GO to GROW Scholarship to secure funding for your Blessed Back Worldwide mission trip today.

Dr. Kathy Raynor is a Gastroenterology specialist and is Board Certified in Internal Medicine. On the long road to her specialty, Dr. Raynor completed a residency in Internal Medicine at University of Connecticut and a Gastroenterology and Hepatology Fellowship at the Long Island College Hospital in Brooklyn, NY. Dr. Raynor currently resides in Myrtle Beach, South Carolina and is interested in women’s medicine and liver disease. She also enjoys sharing her skills with those in need. “To be able to touch someone's life even if just for a short period of time can be a lifelong effect. Being able to provide both care and education can have long lasting effects beyond the period of time one is able to volunteer,” Dr. Raynor expressed in her GOtoGROW application. She has volunteered in Kenya, Cambodia, St. Lucia, and St. Kitts, and now in Nicaragua.

Consider making charitable contributions as 2022 comes to an end and you look for ways to reduce your year-end tax exposure.

END_OF_DOCUMENT_TOKEN_TO_BE_REPLACED

One of the most meaningful aspects of accumulating wealth is the ability to give back. Families and individuals donate for a variety of reasons. ...

END_OF_DOCUMENT_TOKEN_TO_BE_REPLACED

Common questions regarding tax deductions and charitable contributions. Each year, our team of financial advisors receives a plethora of questions ...