Can I Count on Social Security?

From time to time, our social security system makes headlines because someone is questioning if there will be enough for the next generation or if the age of retirement needs to change. Whatever the reason social security is in the news, it does pose an important question – can we as a nation count on social security? 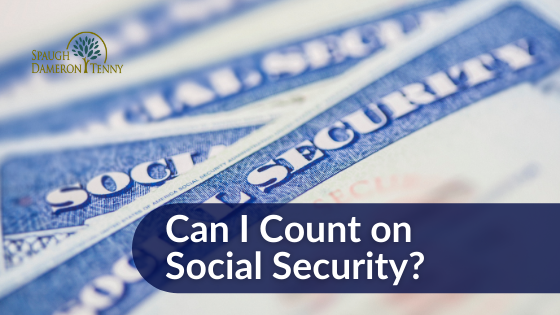 What Happened to my Social Security Paper Statement?

Now that social security has been mentioned, you may be thinking, ‘Hey, I used to receive periodic statements in the mail showing my benefits, and I haven’t seen one of those in years.’ Well, you are not alone in that thought. After the great recession, the social security administration stopped mailing out those paper statements due to budget cuts and trying to be more fiscally responsible.

Don’t worry. You can still get all the information for free directly through the social security administration website. First, find the Social Security Statement link. There you can follow the prompts to input some personal information and download your own report.

Watch the video about whether or not you can count on social security in retirement or keep reading:

How Many Workers Does it Take to Support Social Security for One Retiree?

Based on a report from the social security administration, there has been an important move over the last several decades. There is a shift from having more than three workers paying social security taxes into the trust fund for every single retiree taking money out to about two workers per retiree over the next 10 to 15 years.

This information gives rise to the question of what is going to happen: "Am I going to be able to count on social security as part of my family’s retirement plan?"

I think it is an informed question, and in my opinion, I think you can, and here is why:

I do not think there is the political willpower in Congress.

As we move through the next several decades, I don’t see Congress turning their backs on such a considerable percentage of the American population and voter block by saying, ‘Sorry about all that work you did, but we just don’t have the money.’

It doesn’t seem that this approach will be politically feasible or publicly palatable when there are many other solutions to consider. One of which we saw evidence of in the second quarter of 2020, during the COVID pandemic. When the entire U.S. economy shut down, the government did what only the government can do: print money. The government can create money to pay for things that it wants to.

And, I think that can happen here. But, in addition, there are a couple of other levers that Congress can pull.

1. Raise the Age at Which Full Social Security Benefits Are Available

This happened before in 1983 when the age moved from 65 to 67 in a gradual increase for collecting full Social Security retirement benefits. So, it is not a great stretch of the imagination to think it could move to 68 or 69 in the future. To clarify, raising the social security age doesn’t mean you won’t be able to file for benefits early, which you can do now. It is that your full or maximum benefit will not be available until you reach the age threshold.

2. Raise the Social Security Wage Base

Most people are not aware that you don’t pay social security taxes on income over a certain level. In 2021, that is around $143,000. So, for executives, physicians, dentists, professionals making more than $300,000, social security taxes are only assessed on the first $143,000 of earnings. It would be very feasible to raise that level to $200,000, $250,000, or $300,000, which would instantly generate more revenue being paid into the social security trust fund to support the retirement benefits that need to be distributed.

There are a variety of methods that can be used to improve or remedy the funding deficit. Even by the social security administration’s own reporting, if we look all the way out to 2095, they show that there will still be funds to support at least 75% of the promised retirement benefits under the current method.

To reiterate, I don’t know what is going to happen. But still, I hope these thoughts give you an informed framework to think about the question of whether or not social security is a viable part of the retirement plan that you are putting together for your family.

If you have any questions about social security and retirement or any other financial topic, please don’t hesitate to connect with our team at Spaugh Dameron Tenny.

A Look Back: Lessons from the 2022 Financial Markets

The calendar has flipped, and we now have a new year upon us. It is time for a fresh start. First, however, we'd be remiss if we didn't take the ...

END_OF_DOCUMENT_TOKEN_TO_BE_REPLACED

Saving for Retirement Amid Inflation

Inflation is hitting Americans where it hurts – their finances. According to a 2022 retirement planning study by Fidelity, more than 70% of ...

END_OF_DOCUMENT_TOKEN_TO_BE_REPLACED

The beginning of the financial life cycle of a physician begins when you enter your residency. You will be earning a paycheck and able to use the ...